HomeThe Relaunch Of Aka Sushi Downtown 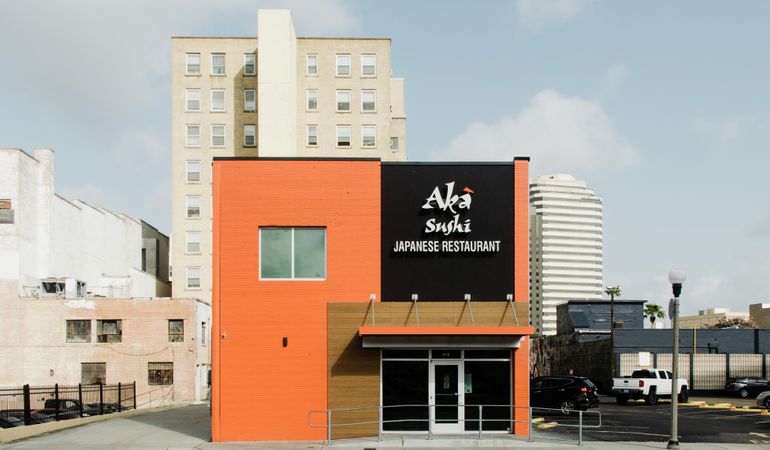 The Relaunch Of Aka Sushi Downtown

Words and Photos By: Luis Arjona
Since 2001, Aka Sushi Japanese Restaurant has been a staple in Corpus Christi, Texas. Serving up delicious meals from the mind of South Korean native James Kim. Owner and operator of Aka Sushi Downtown, Kim is the champion of the restaurant. Since its inception, Aka Sushi has been a city favorite. Leading his team to earn several The Caller-Times Best of the Best for several years.
James Kim immigrated to the United States in 1980. Living in Houston, Texas for about ten years, he decided to make the move to Corpus Christi, Texas. He wanted to fulfill his dream of opening up the first traditional sushi restaurant in South Texas. To raise capital for his dream, Kim began his ascent by opening a store under the name Times Market. Garnering success in his first store, Kim then expanded to what would be a total of seven Times Markets throughout the area. After ten years of maintaining and operating the network of Times Markets, Kim then began to sell his assets to other Korean immigrants who were also chasing their “American Dream.”
With the capital of his market venture, Kim raised enough for his first Aka Sushi located on Everhart Road. This was the start of the legacy of Aka Sushi. Serving up delicious meals, sourcing fresh ingredients, and providing a wonderful environment is all in a day’s work. Through his dedication, Kim’s labor of love gained enough popularity and trust from the community to open up his second location.
With options around the city, Kim chose to purchase property on Water Street. For the past two decades, he has been serving the residents of the Coastal Bend with irresistible specialty rolls, traditional Japanese dining, and Korean family specialties. Now, with the help of the Downtown Management District (DMD) and the City’s Development Incentives Program, Kim’s met his goals by investing in Aka Sushi Downtown and relaunching with improvements and renovations. Aka Sushi Downtown aims to serve locals and visitors alike with top tier service, leaving those who visit with an incredible experience.
This family-run local business is a force to be reckoned with. The staff and family of Aka Sushi work with a drive that leads me to believe that the sky is the limit for this wonderful restaurant. Due to Covid-19, the “Grand Opening” of Aka Sushi Downtown was delayed until July 24th, 2020. However, they have been fulfilling take-out orders and are serving dine-in customers in a thoroughly clean space. Even Anton Ego would be impressed.